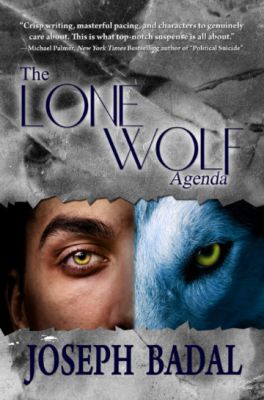 The Lone Wolf Agenda continues the story of Bob & Liz Danforth, and their son, Michael. This book, like it's predecessors, Evil Deeds, Terror Cell, and The Nostradamus Secret, is a roller coaster ride of action and suspense built on a story that could be ripped from today's headlines.

With The Lone Wolf Agenda, Joseph Badal returns to the world of international espionage and military action thrillers and crafts a story ripped from today's headlines that is as close to the real world of spies and soldiers as a reader can find. This fourth book in the Danforth Saga (Evil Deeds, Terror Cell, and The Nostradamus Secret) brings Bob Danforth out of retirement to hunt down lone wolf terrorists hell bent on destroying America's oil pipeline infrastructure.

As the United States discovers more and more oil reserves and is moving toward energy self-sufficiency, OPEC realizes it is about to lose its largest customer. The organization puts in place a lone wolf terrorist ring, in league with a Mexican Drug cartel, to attack America's pipeline network. Danforth and his son, Michael, now a senior officer with DELTA Force, partner to identify and neutralize this terrorist network. Badal weaves just enough spyware and weapons technology into his story to wow even the most a-technical reader.

This story is an epic adventure that will chill readers as they discover that nothing, no matter how diabolical, is impossible.

“A real page-turner in every good sense of the term. 'The Lone Wolf Agenda' came alive for me. It is utterly believable, and as tense as any spy thriller I’ve read in a long time.”
--Michael Palmer, New York Times Bestselling author of “Political Suicide”

" 'The Lone Wolf Agenda' is an epic thriller that will shock readers as they discover just how far the enemies of the United States will go to further their cause. Nothing is out of bounds and no one is off limits. When you start reading the 'The Lone Wolf Agenda,' be prepared to lose a night of sleep!"
--Andrew Peterson, author of “Option to Kill”

“Starts off with a bang, and the suspense ratchets up from there. The fourth installment in the Danforth Saga may be the best yet. Nobody does political thrillers like Joseph Badal.”
--Steve Brewer, author of “A Box of Pandoras”

“In 'The Lone Wolf Agenda,' Joseph Badal has crafted a fast-paced thriller that will keep you up well into the night—and thinking long after the final chapter. Outstanding!”
--Philip Donlay, author of “Zero Separation”