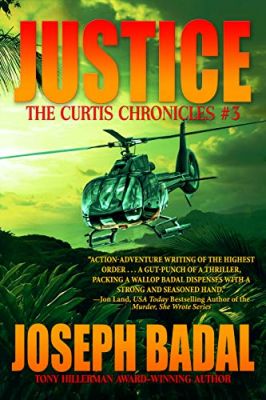 Amazon #1 Best-Selling author Joseph Badal presents the third in his Curtis Chronicles series with the same relentless tension that is a trademark of his award-winning suspense novels.

In “Justice,” Matt and Renee Curtis return, along with their maniacal tormentor, Lonnie Jackson. On a trip to Costa Rica with their friends Esteban and Alani Maldonado, Matt and Renee believe they are beyond Jackson’s reach. But Jackson orchestrates the kidnapping of Renee and Alani and transports them to his human trafficking headquarters in Nicaragua.

The Curtis Chronicles saga is an epic series into the age-old conflict between good and evil and will have you begging for more.