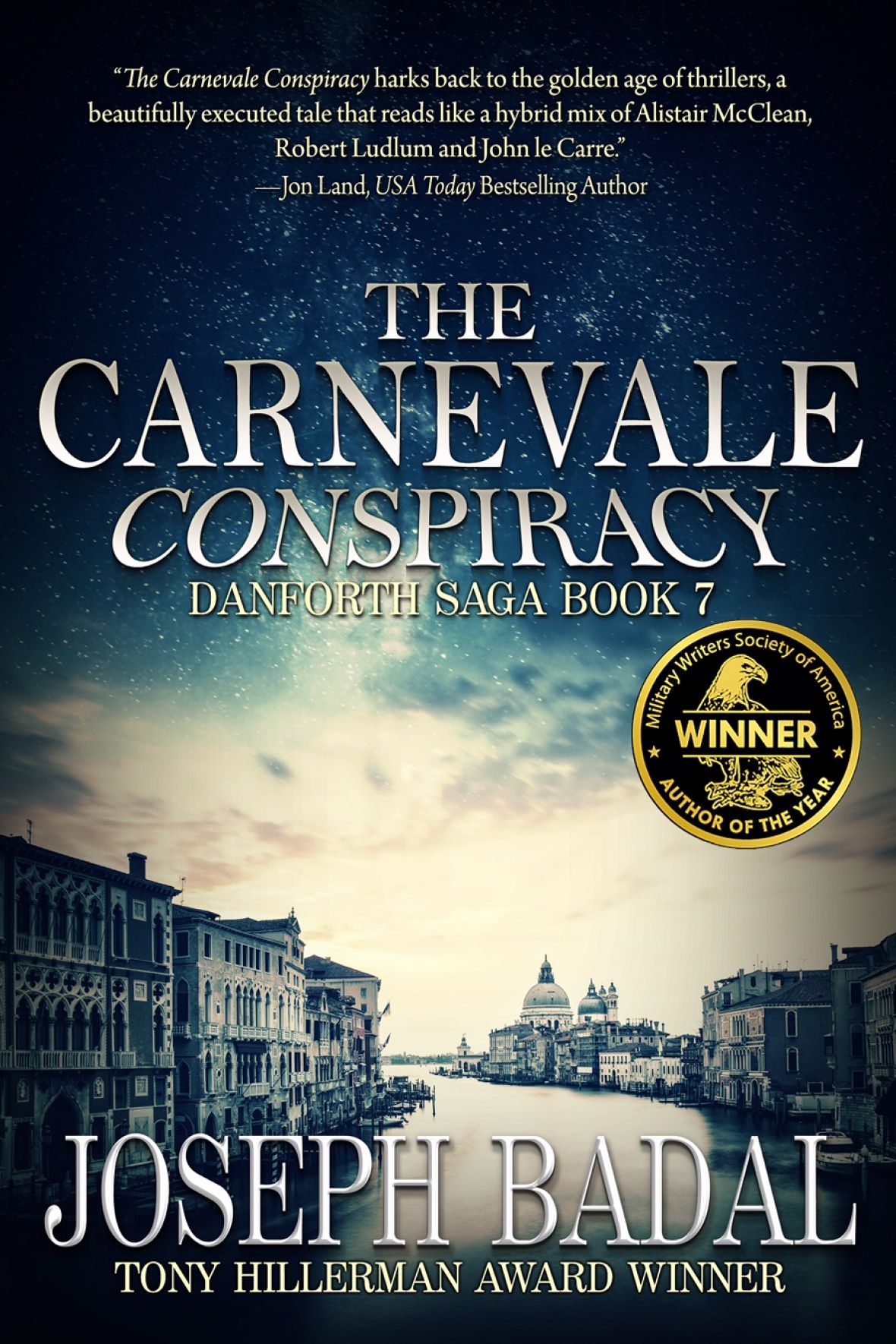 The Carnevale Conspiracy is the seventh in the Danforth Saga series, which also includes, Evil Deeds (#1), Terror Cell (#2), The Nostradamus Secret (#3), The Lone Wolf Agenda (#4), Death Ship (#5), and Sins of the Fathers (#6). Bob and Liz Danforth are on the vacation of a lifetime—Venice, Italy during Carnevale. But, when they are caught up in the diabolical actions of a secret organization, patterned after the 11th Century’s Hashashiyan, or Order of Assassins, their trip becomes a nightmare of herculean proportion.

The Carnevale Conspiracy is an epic tale that brings together international intelligence agencies; a cadre of assassins inspired by a 900-year-old sect and their leader, the Old Man of the Mountain; a global assassination campaign that targets Western leaders; an intrepid MOSSAD agent; and a cast of heroic characters and evil traitors.

Fans of Joseph Badal’s Danforth Saga will find this 7th in the series full of the tension, action, and authenticity they have come to expect and enjoy.

“Relentless from start to finish, The Carnevale Conspiracy is a tension-filled thriller that will delight fans of Brad Thor, Robert Ludlum, and Daniel Silva. As with the other novels in his Danforth Saga series, Joseph Badal masterfully weaves historical context into a modern adventure set in Venice, Italy, replete with villains you will love to hate and heroes you will cheer for.”
--Steven Pressfield, Best-Selling Author of "A Man At Arms"

“It’s a dangerous world in which the characters in The Carnevale Conspiracy find themselves. No one does international conspiracy adventures better than Joseph Badal. He’s been there.”​
--Steven Havill, Award-Winning Author of The Posadas County Mysteries

“Riveting. A secret organization is killing high ranking military and political officials. The lives of at least a thousand people are in jeopardy as the clandestine entity plans to unleash a thousand sleeper cells. After an attempt on his life in Venice, Robert Danforth returns to action in a lightning paced thriller from the masterful Joseph Badal. A superb entry in a stellar series. Highly recommended.”
--Sheldon Siegel, New York Times Bestselling Author of the Mike Daley/Rosie Fernandez Series.

“Joseph Badal has produced a terrific new thriller with his latest novel, The Carnevale Conspiracy. The seventh entry in the Danforth Saga has got it all. An engaging cast of good guys and memorable villains. A tour of the Venice canals and ancient alleyways. And an audacious page-turner of a plot: A thousand sleeper agents trained at the assassins’ lair of the Old Man of the Mountain in Iran. All with the same goal, the mass murder of an equal number of military leaders, politicians and business executives-with the Danforths as special targets- in an attempt to disrupt and dishearten the West. As the Italians would say, “moltobene!”
--Paul Kemprecos, New York Times Bestselling Author

“Who can resist an original take on international terrorism, smart bad guys, memorably crafted settings and a high-stakes game of revenge? Joseph Badal’s latest soars to a climax at Venice’s Carnevale that takes “thriller” to breathless new heights.”
--Anne Hillerman, New York Times Bestselling Author of the Chee/Leaphorn/Manuelito Mysteries, Including