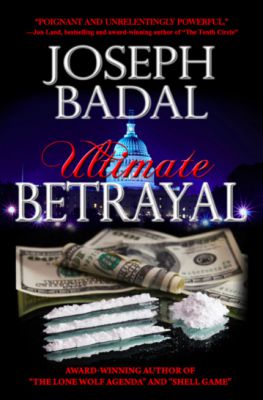 Ultimate Betrayal is a thriller that takes the reader on an action-packed, adrenaline-boosting ride, from the streets of South Philadelphia, through the Afghanistan War, to Mafia drug smuggling, to the halls of power at the CIA and the White House.

David Hood comes from the streets of South Philadelphia, becomes a decorated Afghanistan War hero, builds a highly successful business, marries the woman of his dreams, and has two children he adores.

But there are two ghosts in David's life. One is the guilt he carries over the death of his brother. The other is a specter that will do anything to murder him. David has long lost the belief that good will triumph over evil. The deaths of his wife and children only reinforce that cynicism. And leave him with nothing but a bone-chilling, all-consuming need for revenge.

“ “Ultimate Betrayal” provides the ultimate in riveting reading entertainment that’s as well thought out as it is thought provoking. Both a stand-out thriller and modern day morality tale. Mined from the familial territory of Harlan Coben, with the seasoned action plotting of James Rollins or Steve Berry, this is fiction of the highest order. Poignant and unrelentingly powerful.”
--Jon Land, bestselling and award-winning author of “The Tenth Circle”

“Joseph Badal has surpassed his own high standards once again. He pulls out all the stops in his new standalone thriller “Ultimate Betrayal,” a tale of crime, espionage, family tragedy, family ties, and ultimately justice and redemption.

“He is the master of the cinematic thriller, in the best sense of the term. His trademark short chapters from multiple points of view take readers on a rocket ride into the worlds of military service, government agencies, law enforcement, family bonds, and organized crime. If you haven’t read a Badal thriller before, “Ultimate Betrayal” is a great first step in immersing yourself in his body of work.

“So put on a pot of coffee and fasten your seat belt.”
--Robert Kresge, former CIA officer and author of the Civil War spy novel “Saving Lincoln” and the Warbonnet historical mysteries

“Joseph Badal keeps getting better and better. He knows how to spin a multi-viewpoint thriller without losing the reader, and he knows the international stage so well that he can take us to both exotic and down-home places in a story that flows effortlessly. And uniquely, he can ratchet up the action to a fever pitch without burying us in pages of techno babble. In this tale of “Old World vengeance without New World remorse,” you’ll love the good guys and hate the bad guys—just as it should be.”
--Steven F. Havill, author of the Posadas County Mystery series