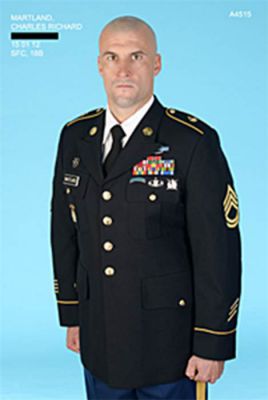 Charles Martland grew up in Milton, Massachusetts. He played high school football and went on to play for Bobby Bowden at Florida State. When Pat Tillman, a former NFL football player who volunteered for the Army Rangers, was killed in Afghanistan in 2004, Martland saw Tillman's sacrifice as motivation to apply for military service.

Martland dropped out of college and graduated in 2006 from Special Forces Qualification Course, one of the U.S. military's toughest training programs. Over the years he became a jumpmaster, combat diver, and sniper.

After a deployment to Iraq in 2008, he deployed to Afghanistan in January 2010 as part of a 12-man unit. He and his team found themselves fighting large numbers of Taliban militants in volatile Kunduz Province. But then Martland came up against the bureaucrats at the Pentagon.

What would you do if a distraught mother came to you for help because a local policeman had repeatedly raped her 12-year-old son, and then you learned that the same policeman assaulted the woman in retaliation for her reporting him? I hope to God that your answer is not: Nothing. I suspect you would take action.

That’s exactly what Sgt 1st Class Charles Martland and his team commander did when an Afghani woman in Kunduz Province told them that a local Afghani police commander had repeatedly raped her 12-year-old son and then beat her up for reporting him. When the man laughed off the incident, they shoved him to the ground.

The action they took was to push the man to the ground. Really! They pushed a serial child molester and woman beater to the ground. Wow, what a terrible response!

Martland and his team leader were later removed from the base and eventually sent home from Afghanistan. The U.S. Army has not confirmed the specifics of Martland's reason for proposed separation from service citing privacy reasons, but a “memorandum of reprimand” from October 2011 makes clear that Martland was criticized by the brass for his intervention after the alleged rape. Asked for comment in September 2015, an Army spokesman reiterated, "the U.S. Army is unable to confirm the specifics of his separation due to the Privacy Act."

In a stunning reversal, the U.S. Army decided on April 28, 2016 to retain Martland, a decorated Green Beret it had planned to kick out for physically confronting a local Afghan commander accused of raping a boy over the course of many days. I repeated this because I am having a difficult time reconciling the Army’s action with Martland’s action.

"I am real thankful for being able to continue to serve," said Martland when reached on the telephone by Fox News.

An Army spokesman said that Martland's status has been changed, allowing him to stay in the Army.

"In SFC Martland’s case, the Army Board for Correction of Military Records determination modified a portion of one of SFC Martland’s evaluation reports and removed him from the QMP list, which will allow him to remain in the Army," said Lt. Col. Jerry Pionk.

Martland's former Special Forces team leader, now out of the Army and living in New York, said the Army is a better place with Martland in its ranks.

"This is not just a great victory for SFC Martland and his family- I’m just as happy that he can continue to serve our country and inspire his peers, subordinates and officers to be better soldiers.  Charles makes every soldier he comes in contact with better and the Army is undoubtedly a better organization with SFC Martland still in its ranks," said Martland's former team leader Danny Quinn when reached by Fox News Thursday.

"I am thrilled beyond words that my brother is able to continue his career of service to country. The relentless defense of Charles as a soldier and a man of integrity by his friends, family and colleagues sent a clear message that abhorrent decision making made in the interest of self promotion and lacking common sense will not be tolerated. Charles is where he belongs. He is an elite warrior. He belongs on the front lines. Our enemies’ last vision in this life should be of Martland's face. They have earned that right," said Casey a former Special Forces teammate of Martland's who asked that only his first name be used due to the sensitive nature of his current work.

The American Center for Law and Justice, which was involved with a writing campaign to keep Martland in the Army, called the decision a “significant victory."

“The decision by the Army to retain this hero is long overdue and represents a significant victory for SFC Martland,” said Jay Sekulow, Chief Counsel of the ACLJ.  “Justice has been served. The U.S. military has a moral obligation to stop child sexual abuse and exonerate SFC Martland for defending a child from rape. The Army finally took the corrective action needed and this is not only a victory for SFC Martland, but for the

So, let me get this straight. Sgt. Martland stood up for an abused little boy and his mother, received a reprimand in October 2011, was told he would be separated from the service involuntarily last August, had to appeal that separation, and finally learned on April 28 he would be allowed to continue to serve. His former commander, a West Point graduate, separated from the service years ago (probably saw the handwriting on the wall.) And the Army only took action to reinstate Martland after lobbying by a U.S. Congressman and by the American Center for Law and Justice. Does anyone see the sense in this? How many other Everyday Heroes have been kicked out of the military for doing something that was right and brave?

I am thrilled that Sgt. Martland will continue to serve in the U.S. Army. I am horrified that he had to go through this experience because of an absence of common sense at the Pentagon. I have a sinking feeling that the warriors are no longer in charge, having been replaced by politicians.

This post was excerpted from a report written by Lucas Tomlinson, Pentagon and State Department producer for Fox News Channel. FoxNews.com's Judson Berger contributed to the report.

Joseph Badal is the author of 9 suspense novels, including The Pythagorean Solution, Evil Deeds, Terror Cell, The Nostradamus Secret, The Lone Wolf Agenda, Death Ship, Shell Game, Ultimate Betrayal, and Borderline. His next novel, The Motive, will be released on July 19, 2016. He is a decorated Army veteran who served in Greece, Vietnam, and CONUS.