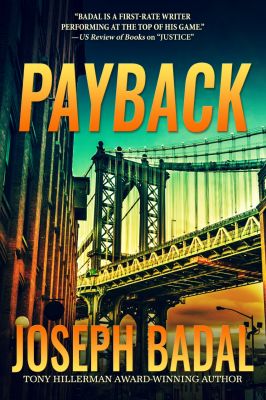 When Bruno Pedace learns that his investment banking partners are setting him up to take the fall for their own corrupt practices, he does what he has always done—run away. But the documents he takes with him put a target on his back. He changes his name and, for nine years, goes underground, until an assassin tracks him down in California and badly injures him.

Befriended by Janet Jenkins, a courageous woman who works in a battered women’s shelter, Bruno, for the first time in his life, with Janet’s help, fights back. He constructs an ingenious financial scheme to get payback for the crimes perpetrated by him former partners.

In PAYBACK, Award-Winning, Amazon #1 Best-Selling author Joseph Badal weaves a story about a sympathetic protagonist who, when pushed too far, finally pushes back. This is a story about revenge that includes assassins, corrupt Wall Street investment bankers, a Mafia capo, Asian gangs, and heroic cops. And, to top it all off, it is a story about friendship and love.

"Payback is a twisty tale packed with turnabouts, betrayals and double-crosses galore. Joseph Badal's steamy, scintillating crime tale crackles with color, authenticity and a plot that combines the best of Joe Finder and Harlan Coben. A thriller of rare depth and pathos, Payback pays back on every page, making it one of the true must-reads of 2020."
--Jon Land, USA Today bestselling author of the Murder, She Wrote series

"Joseph Badal reigns supreme in the thriller genre, and he’s done it again with his intense thriller, Payback. Investment banker, Bruno Pedace, is set up to take the fall for his New York employers’ securities fraud. But before he can be arrested, he takes his money and runs. Nine years later, he resurfaces in Redondo Beach, California where a chance contact with Janet Jenkins, a social worker for battered women, triggers a relationship that weaves in and out throughout the novel even as Bruno sets out to clear his name and take down the company that framed him. This is a story of redemption fraught with life-and-death encounters with organized crime, a Vietnamese gang, lethal assassins, and good and bad cops.

Badal is a skilled stylist. His attention to detail allows the reader to easily go with the flow of his skilled storytelling. His settings are believable whether they exist in southern California or on an island off the coast of Viet Nam, the streets of New York or a bank in the Caribbean. Extended tension keeps the story moving, and just when the reader is ready to take a breath, Badal adds another twist, a colorful character, or a blood-pounding action scene. Multiple, intriguing threads come together as Badal orchestrates the story, urging the reader to pull for Bruno as he fights to do the right thing and redeem himself. Payback could very well be Badal’s best work yet."
--John Carenen, Award-Winning Author of the Thomas O’Shea Mystery Series

"A terrific read! Joseph Badal takes a break from his series characters and pens a white-hot standalone thriller filled with suspense, intrigue, and revenge. Social worker Janet Jenkins and financier Bruno Pedace are finely drawn characters who are worth rooting for--not super-human heroes found in more pedestrian thrillers. Badal's expertise in the world of high finance shines in this gripping story. With a finely tuned, fast-paced plot, the narrative in PAYBACK hurtles forward to a satisfying conclusion. Highly recommended.
--Sheldon Siegel. New York Times and Amazon best-selling author of "THE DREAMER."

"Malice aforethought...that's what Joe Badal arms his villains with, and the result is a tension-filled tale.  Joseph Badal handles a complex, international world with aplomb. It's a one-sitting read!"
--Steven Havill, Bestselling Author of The Posadas County Murder Mysteries